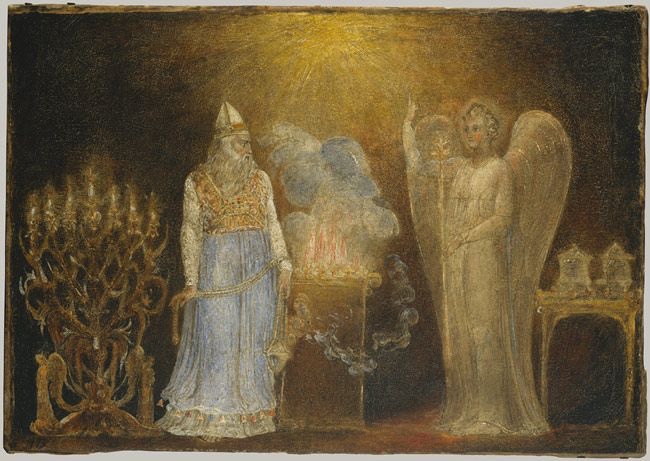 We’re sticking to our format and giving ourselves another day to work on the same part of the memory verses.

How is it going for your kids? Wow, guys! My kids really impressed me today. As soon as I asked who remembered our memory verse my 5-year-old said it. Correctly, to boot! Then my 6-year-old said she remembered it too and also said it correctly. Woohoo! My 3-year-old is still being her usual stubborn self. She’s absorbing something though, I’m sure of it.

8 Once when Zechariah’s division was on duty and he was serving as priest before God, 9 he was chosen by lot, according to the custom of the priesthood, to go into the temple of the Lord and burn incense. 10 And when the time for the burning of incense came, all the assembled worshipers were praying outside.

11 Then an angel of the Lord appeared to him, standing at the right side of the altar of incense. 12 When Zechariah saw him, he was startled and was gripped with fear. 13 But the angel said to him: “Do not be afraid, Zechariah; your prayer has been heard. Your wife Elizabeth will bear you a son, and you are to call him John. 14 He will be a joy and delight to you, and many will rejoice because of his birth, 15 for he will be great in the sight of the Lord. He is never to take wine or other fermented drink, and he will be filled with the Holy Spirit even before he is born. 16 He will bring back many of the people of Israel to the Lord their God. 17 And he will go on before the Lord, in the spirit and power of Elijah, to turn the hearts of the parents to their children and the disobedient to the wisdom of the righteous—to make ready a people prepared for the Lord.”

This is what I told my kids: