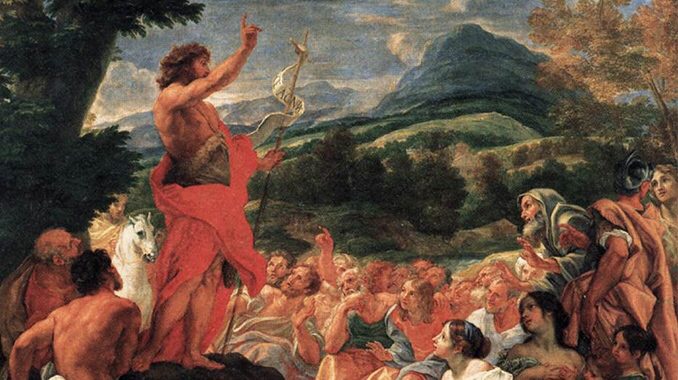 For Day 2, we won’t be adding a new section to our memory verses. Instead, we’ll stick with what we started on day one.

This gives us a chance to really solidify in our minds what we have so far. See if your children remember it without you having to remind them what it is. If they don’t, that’s okay! Just keep reading it every day.

Only my 6 year old remembered it today with no help. Given the prompt, “In the beginning…” my 5 year old remembered, “…was the Word.” Then she had no trouble repeating to back to me. My 3 year old refused to even repeat it when I asked her to, which is par for the course for my most stubborn child. I didn’t push the issue. It causes more trouble than it’s worth, and I think that’s her plan so I’m try not to indulge her. By day 25 she’ll remember some of it, right? Surely? I’ll let you know.

“In the beginning was the Word…”

6 There was a man sent from God whose name was John. 7 He came as a witness to testify concerning that light, so that through him all might believe. 8 He himself was not the light; he came only as a witness to the light.

9 The true light that gives light to everyone was coming into the world. 10 He was in the world, and though the world was made through him, the world did not recognize him.

We’re still in the Gospel of John, so we’re still dealing with that poetic language. Today we are introduced to John the Baptist.

We could have skipped the verses about John, but the Apostle John (I know, two Johns! It gets a little confusing) included it in his version of the gospel and Luke also included him in his version, which we will also read. If John the Baptist was important enough to make it into both of these accounts, then he’s important enough for me to keep him in there.

Here is what I tell my children: