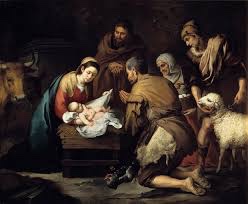 Today my children and I are reading more about the shepherds! But first, let’s review the memory verses.

I couldn’t be more impressed by how well my 6-year-old is doing with the memory verses! Today she even corrected me when I said the new part was, “In him was light…” She remembered that it is actually, “In him was life…”

15 When the angels had left them and gone into heaven, the shepherds said to one another, “Let’s go to Bethlehem and see this thing that has happened, which the Lord has told us about.”

16 So they hurried off and found Mary and Joseph, and the baby, who was lying in the manger. 17 When they had seen him, they spread the word concerning what had been told them about this child, 18 and all who heard it were amazed at what the shepherds said to them. 19 But Mary treasured up all these things and pondered them in her heart. 20 The shepherds returned, glorifying and praising God for all the things they had heard and seen, which were just as they had been told.

This is what I tell my kids: